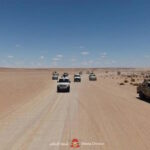 Units of 128th Brigade of the Libyan National Army (LNA) have conducted military patrols in the South, starting from al-Jufra region to Zella and then Wadi al-Aqib, passing through al-Fuqaha area up to al-Haruj mountains.

The brigade had confirmed earlier that intensive patrols are continuous at the border areas for the purpose of securing and striking with an iron fist at anyone who seeks to tamper with the security of the homeland and its people.

0 0
Previous : NOC Chair: Libya can provide Europe with oil and gas to replace “some current supplies”
Next : Libyan Coast Guard intercepts over 200 migrants at sea