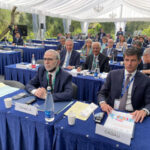 NOC Chair: Libya can provide Europe with oil and gas to replace “some current supplies”

Date: Monday, May 16, 2022
135 Views
Chairman of the Libyan National Oil Corporation (NOC), Mustafa Sanalla, said there are exciting capabilities in Libya to develop hydrocarbons to provide Europe with oil and natural gas through the sea by the pipelines using the existing infrastructure, according to NOC.
Sanalla added, in a forum in Sorrento, Italy, that Libya can provide safe supplies of oil and natural gas to Europe, and can complement or replace some current supplies, NOC said in a statement on Saturday.
In the presence of the President of the Italian House of Representatives, the Prime Minister of Italy and many European international institutions personalities, the President of the Italian Republic opened the forum “towards the South”: The European Strategy, which continued throughout 2 days, May 12-13, 2022.
NOC Chair stated: “I am aware that many observers believe that Libya remains a high-risk territory that created exacerbated tensions for oil investor.  This is not so.  Indeed, over the past two years International Oil Companies (IOCs) such as Eni, TotalEnergies, Repsol, ConocoPhillips, Equinor, OMV and others, have been investing and contributing over $1 bn per year towards exploiting Libya’s resources.”
“Other companies, such, BP, Sonatrach , others and the Polish Oil and Gas Company, are resuming their exploration and appraisal activities in Libya.  I am pleased to say that other companies are showing interest too,” he added.
In a related context, Sanalla’s making stated by saying: “We are currently reviewing plans for the development of North Gialo 6J Area and NC-98, a joint onshore oil development with TotalEnergies, ConocoPhillips and Hess, with an estimated budget of $3.5bn. We have other gas development ready projects such as NC-7 and NC-210/Atshan, in Ghadames basin, with an estimated capital of over $4bn to supply gas to the local and international market over the next 3 to 5 years.”
NOC Chair confirmed in his speech that “Libya of course is the right place to invest in Natural Gas due to current crisis in Europe. its vast fortunes, the country is a prominent global player. It is a major oil producer in Africa.”
“In addition, this is an opportune time to invest in Natural Gas. As the turmoil continues in Europe, the impact of the current crisis on energy markets needs serious discussion. There are broad global challenges to Natural Gas.”
“I have talked about the challenges facing the global oil markets in other forums. But what I described today in Sorrento reflects the situation that the world’s Natural Gas markets are now facing.
Like oil, Natural Gas is witnessing an increase in demand in the main consumption regions of Italy and Europe as a result of the tensions in Eastern Europe.”
Sanalla a brief of Libya’s oil and gas resources and reserves, current and expected production rates, as well as Libya’s strategic position in the European market, NOC statement pointed out.
Tags:EuropeLibya oilMustafa SanallaNOC

0 0
Previous : UN Adviser: Delaying agreement on constitutional framework for elections will lead Libya to division and conflict
Next : LNA conducts military patrols in the South