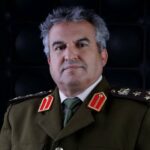 BENGHAZI – Major General Khaled Mahjoub, a media official of the Libyan National Army (LNA), said on Wednesday that naming a defense minister is necessary, adding that it will contribute to the unification of Libya’s military institution.

Mahjoub told Sky News Arabia that the decision to allow Prime Minister Abdul Hamid Dbeibeh to serve as a de facto defense minister was made to prevent political conflicts, however, he acknowledged that such decision is “unprofessional”.

The LNA official added that whoever ends up in the position as to be a “patriot” and “familiar with the sensitivity of the critical stage and the seriousness of its impact”.