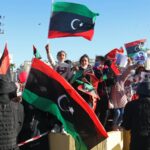 BENGHAZI – The Movement For December 24, a pro-election NGO, has called for upholding elections date and rejected any attempts to deflect from the UN-sponsored peace roadmap.

In a statement released on Wednesday, the Movement For December 24 has held the U.N Mission in Libya responsible if the Libyan Political Dialogue Forum (LPDF) fails to decide on a constitutional basis for the elections by July 1st.

The NGO affirmed that any obstruction to the elections would be met with protests and civil disobedience.