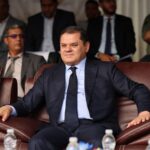 Ahmed Al-Sharaksi, a member of the Libyan Political Dialogue Forum, condemned on Thursday’s an announcement made by the Ministry of Youth, in which it called on young Libyans to take part in demonstration tomorrow in support of Prime Minister Abdul Hamid Dbeibeh.

“We should not be aiding on party against the other,”Al-Sharaksi stated via his Facebook page. “And we should take part in mass demonstrations in support of the elections only”.

It is noteworthy that the Libyan parliament has withdrawn confidence from Dbeibeh’s government, which is now acting as caretaker.