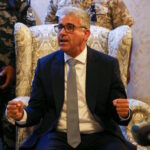 Bashagha in Paris preparing for his presidential election campaign – report

French Jeune Afrique news magazine said it interviewed Fathi Bashagha, Interior Minister of the Libyan former Government of National Accord (GNA), at La Reserve hotel bar in Paris, where he was preparing for his presidential election campaign.

He strongly desires to run for the presidency, and does not skimp on any means to achieve his ambition, especially with Western countries, including the United States, which he confirmed that he will visit soon, according to the magazine.

Bashagha traveled to France between September 13 to 15 to meet with politicians and businessmen, in preparation for announcing his official candidacy for the presidential and parliamentary elections next December, it said.

The former Interior Minister seeks, through his foreign visits, to improve his image and that of Libya among investors, and to polish his image at the French Foreign Ministry, the report added.

He is still an important ally of Ankara, especially since the Turkish forces supported him in repelling the Libyan National Army’s campaign to control Tripoli in April 2019, it pointed out.

Bashagha’s announcement of a plan to dismantle the militias in Tripoli and the Libyan West, and his attempt to improve his relations with the tribes, is the most prominent basis for his electoral campaign, said Jeune Afrique.

It is noteworthy that Libya’s presidential and parliamentary elections are scheduled to be held on December 24th this year.