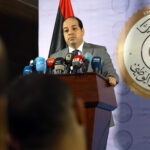 Ahmed Maiteeq, the former deputy chairman of the Presidential Council, has praised the role of Field Marshal Khalifa Haftar in establishing the Libyan National Army (LNA) as a military institution in eastern Libya.

“When it comes to the military institution in the eastern region, the credit goes to Haftar,” Maiteeq told Libyan channel 218 during an interview last night.

“However, as for the attack on Tripoli, it was a mistake and a disaster in the true sense of the word,” he added. “It confused everything in Libya”.

He also criticized other Libyan figures such as former Interior Minister Fathi Bashagha and chairman of the High Council of State Khaled Al-Mishri. He accused Bashagha of “achieving nothing” during his time in office, and accused Al-Mishri of hijacking the council.

Maiteeq claimed that former Prime Minister Fayez al-Sarraj exercised monopoly over the Presidential Council’s decision-making process. He also alleged that his opinions as deputy chairman of the council were not taken into account in the decisions.

He said that former the council spent nearly 116 billion Libyan Dinars ($25 billion) in 5 years, adding that council had suffered mismanagement and corruption.

Maiteeq was reluctant to confirm whether he will run for president in the upcoming elections on December 24.

“It is too soon given that elections laws haven’t been finalized yet,” he said.

0 0
Previous : HNEC asks parliament for amendments to presidential elections law
Next : US AFRICOM commander in Tripoli for talks with Dbeibeh