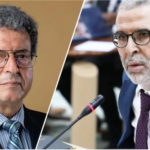 NOC Chair: Oil Minister has no authority to fire me

Chairman of the Libyan National Oil Corporation (NOC), Mustafa Sanalla, confirmed that the Oil Minister, Mohammed Oun, cannot legally suspend him from work or refer him for investigation.

“The Cabinet of the Government of National Unity (GNU) is the decision-maker and has the final say of the no-objection certificate,” Sanalla stressed in an interview with Bloomberg.

He noted that dispute with the Oil Minister will not affect the production of Libyan crude oil, adding that Oil Ministry is a heavy burden on NOC.

Oil minister Oun had ordered an investigation against Sanalla over the latter’s “refusal to hand over corporation leadership to Jadallah al-Awkali, who was appointed by the oil ministry as the new NOC chairman.”