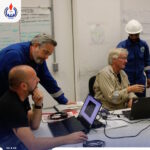 “With the concerted efforts of the workers from various departments, the follow-up of the senior management of the Waha Oil Company and the directives of the National Oil Corporation to work on raising the production capacity of the al-Farigh field, and after forming a working team from some departments to raise the production capacity in line with the operational conditions of the plant and the condition of the wells, the work team began conducting pilot tests on August 15, 2022, and gradually increased production until it reached an average of 149 million cubic feet of gas and 9,000 barrels of condensate per day,” according to NOC.