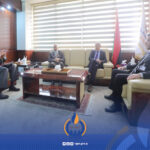 Libyan Oil Minister, Mohamed Aoun, discussed with delegation representing French company Total Energy a number of topics that concern the company’s activity in Libya and its future projects in the fields of oil and gas production and alternative energy.

Total’s delegation consisted of Total Libya CEO, Pascal Brent, and Bashir Bazizi, who is the vice president, CEO and director of the Sustainable Development Department, according to a press release issued by the ministry.

On Friday, the National Oil Corporation (NOC) signed an agreement with France’s Total Energy to implement development projects worth $20 million. The agreement was signed by NOC Chairman, Mustafa Sanalla, and the General Manager of the French company. The projects target areas of oil operations.