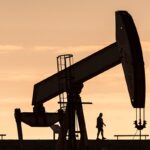 Libya was ranked first among African oil producers for the month of October, with its daily production growing by about 6 thousand barrels per day to around to 1.163 million barrels of oil per day, according to the Organization of the Petroleum Exporting Countries (OPEC).