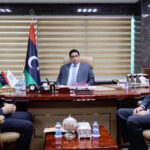 President of the Libyan Presidential Council (PC), Mohamed al-Menfi, stressed during his meeting on Monday with the Head of the Audit Bureau, Khaled Shakshak, and the Head of the Administrative Control Authority, Suleiman al-Shanti, the importance of the work carried out by the Bureau and the Authority.

Al-Menfi explained that the two institutions are considered regulators empowered to apply the laws and regulations in force in detecting financial and administrative violations in government institutions and follow up on their work mechanism.

He stressed to the two heads, the necessity of continuing to work at the same pace, in order to preserve the state’s resources and protect them from abuse.

The President affirmed the Presidential Council’s support for their efforts to combat corruption, in implementation of the laws and legislations in force.

For their part, Shakshak and al-Shanti stressed that the Bureau and the authority implement the regulations and laws in force to combat corruption and administrative abuse, in accordance with the work plans set by specialists, to ensure the smooth and fair workflow of government institutions.