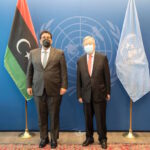 President of the Libyan Presidential Council (PC), Mohamed al-Menfi, discussed on Friday with the Secretary-General of the United Nations, Antonio Guterres, in New York, the latest developments of the situation in Libya, and the need for foreign fighters to leave it, to ensure stability in the country and neighboring countries.

Al-Menfi stressed during the meeting the importance of the role played by the United Nations Support Mission in Libya (UNSMIL) in helping to make the political process a success, in order to reach the holding of the next elections on December 24 in the best political and security conditions, appreciating the role of the UN in supporting the Libyan political dialogue, to restore stability and build the desired democratic state, according to PC Media Office.

Guterres, for his part, welcomed the dialogue paths led by the Presidential Council between all Libyan parties, stressing the need to hold the elections on time, the Media Office said in a statement on Saturday.