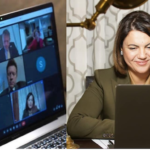 Libyan Foreign Minister, Najla Mangoush, met via Zoom, with the Administrator of the United States Agency for International Development (USAID), Samantha Power, where they discussed Libya’s presidential and parliamentary elections scheduled for December 24 this year, according to the Libyan Foreign Ministry.

Power congratulated Mangoush for being the first woman to hold the Foreign Ministry in Libya, and praised the stability initiative announced by the Minister last June, for which a ministerial meeting will be held on October 21 in Tripoli.

The meeting stressed the importance of holding transparent and credible parliamentary and presidential elections next December, the Ministry said in a statement on Saturday.

She emphasized USAID’s readiness to provide assistance for the success of the electoral process, the United States’ commitment to supporting stability and political transition in Libya, and helping the Libyan people achieve their goals.

Mangoush reviewed during the meeting the steps taken and is being taken by the Government of National Unity (GNU) to achieve peace, stability and development, the statement pointed out.

She welcomed the United States’ assistance to these efforts and the support of civil state institutions, as well as the importance of supporting the program of integrating armed formations.