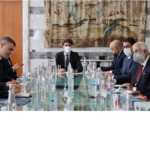 Vice-President of the Libyan Presidential Council (PC), Abdalla al-Lafi, met on Tuesday in Rome with the Italian Foreign Minister, Luigi Di Maio, to discuss the latest political developments in Libya, and ways to hold the elections on their scheduled date at the end of this year, according to PC Information and Communication Office.

Al-Lafi praised, during the meeting held at the Italian Foreign Ministry headquarters, Italy’s role in supporting the stability of Libya and working to continue joint cooperation in many fields, especially economic and social ones, the Office said in a statement.

He also addressed the Presidential Council’s continuous efforts to communicate with all parties to create the appropriate conditions for holding the elections on time, it added.

Di Maio, on his part, welcomed the Vise-President and his accompanying delegation, stressing Italy’s continued support for Libya, in reference to many initiatives on Libya that will be witnessed in the coming weeks, explaining that his country does not want the Libyan people to pay the repercussions of the delay in the transition towards the next election, the statement reported.

The meeting was held in the presence of the Libyan ambassador to Italy, Omar al-Tarhouni, the Political Adviser to the Presidential Council, and former Foreign Minister, Mohamed Siala, and the Security and Defense Affairs Adviser, Ahmed Muhareb, it pointed out.