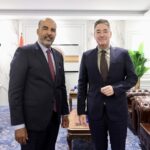 Presidential Council calls for “decentralization” during talks with German envoy

The Deputy Chairman of Libya’s Presidential Council, Mussa al-Koni, has expressed his belief that “return to a governorate system” as an administrative division of a state and “decentralization” will be “basic and effective solution” to end the political deadlock in the country, according to a statement by the council.

Al-Koni shared his perspective during a meeting with German Ambassador Michael Ohnmacht in Tripoli today. The Libyan official explained that a move to decentralization will “keep the capital away from the conflict” and away from “those fighting over money and the powers of the central authority”.

For his part, Ohnmacht reportedly “praised the efforts of the Presidential Council and its cooperation with the UN efforts and countries in supporting the stability of Libya,” as per the council’s statement.