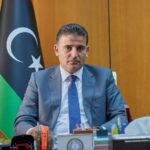 Libya Presidential Council established a military zone in the country’s west coast, which would be led by former Defense Minister Salah Al-Din Al-Namroush, who served in the Government of National Accord (GNA).

According to a statement by the council, the territorial size of this military zone reaches Jazeerat El-Ghiran, west of Tripoli, to the Tunisian border, and Baten Al-Jabal in the south to Libya’s Mediterranean coast in the north.