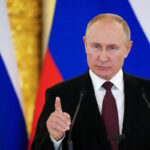 Putin stressed in press statements that this step comes in response to NATO’s threats, which he described as aggressive.

The West is not only taking aggressive economic steps, but NATO officials have made aggressive statements against Russia, the Russian president said.

Putin considered that Ukraine did not take advantage of the appropriate opportunity and the invitation to sit at the negotiating table.