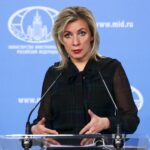 Moscow hopes that Libya’s new cabinet of ministers led by Fathi Bashagha will be able to unify the Libyan society, according to the Monday commentary by Russian Foreign Ministry Spokeswoman Maria Zakharova with regards to the approval of Bashaga as Libya’s new prime minister.

“We think that this choice by Libyan lawmakers should be respected. The important thing is for the existing contradictions between Libyans not to lead to a serious conflict but to be resolved via talks and reaching compromises. We hope that Libya’s new government led by Fathi Bashagha will be able to unify the Libyan society which will help to successfully cope with difficult tasks of the transitional period, including preparations to hold nationwide elections,” she said.

Lawmakers last week selected Fathi Bashagha, a former interior minister, as premier, saying Dbeibah’s mandate had ended after the presidential ballot initially scheduled for December was postponed. Dbeibah, appointed in United Nations-backed negotiations, says he will step down after elections.