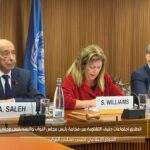 Speaker of the House of Representatives, Aguila Saleh, and chairman of the High Council of State, Khaled Al-Mishri, met at U.N. headquarters on Tuesday to start two-day talks on constitutional arrangements for elections in Libya.

According to the United Nations, the talks will focus on a draft constitutional framework for elections after Libya’s rival factions failed to reach an agreement in their last round of talks in the Egyptian capital of Cairo.

In his opening speech during the meeting, Saleh welcomed Al-Mishri and U.N. Advisor, Stephanie Williams. He also thanked the latter for her “important role” in resolving the Libyan crisis.

The parliamentary speaker affirmed his complete keenness to ensure “transparent elections” for the Libyan people “without foreign interference”.

0 0
Previous : UN is ready to facilitate dialogue between Dbeibah and Bashagha
Next : IOM: 480 migrants disembarked back on Libyan shores in a week