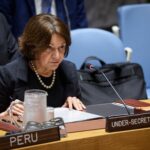 UN is ready to facilitate dialogue between Dbeibah and Bashagha

The United Nations on Monday called on all Libyan political and security actors to “exercise maximum restraint” and “address all disputes through dialogue”, while affirming its “readiness to facilitate dialogue” between Libya’s two rival prime ministers, Abdul Hamid Dbeibeh and Fathi Bashagha.

This was stated by U.N. Under-Secretary-General for Political and Peace-building Affairs, Rosemary DiCarlo, during her speech to the Security Council, in which she addressed the political and economic challenges facing the country.

She also expressed “hope” that the upcoming meeting in Geneva between the heads of the House of Representative and High State Council “will result in a final agreement that would lead to elections at the earliest possible date.”

On the economic front, DiCarlo pointed out that, since 16 April, shutdown of oil fields” has reduced Libyan oil exports by one third and cost the country 3.1 billion US dollars in lost revenue.”

“In addition, the disagreement over the control and use of public funds that triggered the partial shutdown continues and could lead to further oil field closures in the near term,” added the U.N. diplomat.

DiCarlo urged the council to extend the mandate of the Independent Fact-Finding Mission on Libya whose work is considered “essential to investigate and report on violations of international humanitarian law and human rights law”.

Elections the only path to settle disagreements over the democratic legitimacy of Libyan institutions. I urge the leadership of the House of Representatives and the High State Council to agree on outstanding issues so polls can happen as early as possible. https://t.co/J0s6UwrlOO