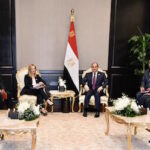 Egyptian President Abdel Fattah El-Sisi met Monday with Italian Prime Minister Giorgia Meloni on the sidelines of the COP27 World Climate Summit held in Egypt, according to the Spokesman for the Egyptian Presidency.

The meeting tackled the latest developments in issues related to Mediterranean security, mainly the Libyan file, the Spokesman said in a statement.

The two sides agreed on the need to work to preserve the unity and sovereignty of Libya, and push for holding presidential and parliamentary elections, preserving national Libyan institutions, and strengthening the role of security authorities in combating terrorism, the statement pointed out.

El-Sisi welcomed the Italian Prime Minister’s visit and her participation in the Climate Summit and congratulated her once again on assuming her post recently, expressing his appreciation for the extended bilateral relations between the two countries, it added.