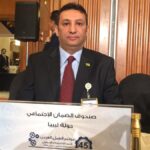 The Social Security Fund has criticized an amended law issued by the House of Representatives, which it says “threatens the fate of the Fund and will drag it into bankruptcy.”

In a statement released on Monday, the Fund called for the abolition of the amended law, which was issued on January 05, 2022, and allows for voluntary retirement for workers whenever their service or work period reaches twenty years.

The Fund claimed that the law was issued without consultations with experts and that it was passed without the approval of the House Legislative Committee.