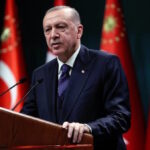 The French website Intelligence Online confirmed the existence of security and intelligence coordination between Turkey and Egypt to consider the extradition of some Egyptian Muslim Brotherhood leaders.

Intelligence Online explained that Ankara has a strong desire to accelerate the pace of rapprochement with Cairo, even if it comes to handing over some leaders of the Muslim Brotherhood, a non-negotiable condition for Egypt, in light of the Turkish desire to settle the differences between the two countries and restore them to their previous era.

The website also clarified in its report that the file of the Muslim Brotherhood has become the focus of increasingly frequent meetings, stressing that Turkish President Recep Tayyip Erdogan is in a hurry to fully restore relations with Cairo, and may accept some of the conditions that Egypt insists on, including the extradition of individuals that Egypt identified and demanded their deportation.

Turkey is studying a list submitted by Cairo bearing the names of some of the Muslim Brotherhood leaders, noting that Hakan Fidan, the Chief of Turkish Intelligence, expressed his willingness to hand over some of these individuals to a third country, perhaps Malaysia or Indonesia, as evidence and proof of good intentions.