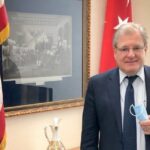 U.S. Special Envoy and Ambassador to Libya, Richard Norland, visited Ankara on August 12 and 13 for “productive consultations with senior Turkish officials in furtherance of U.S. efforts to support Libyan parliamentary and presidential elections in December,” the U.S. Embassy in Libya announced.

“The Ambassador’s travel is focused on the urgency of establishing the constitutional basis and legal framework needed for the elections to take place on December 24,” the Embassy tweeted on Friday.

“The United States supports the right of the Libyan people to select their leaders through an open democratic process free of outside pressure and calls on key figures to use their influence at this critical stage to do what is best for all Libyans,” it added.