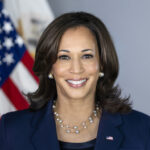 U.S. Vice President: We will demonstrate our strong support for Libya elections in Paris Conference

Date: Tuesday, November 9, 2021
13 Views
U.S. Vice President, Kamala Harris, said she will attend the Paris Conference on Libya to demonstrate her country’s “strong support for the people of Libya as they plan for elections later this year”, according to the White House statement.
U.S. Ambassador to Libya, Richard Norland, also said, upon his arrival in Paris today as part of Harris’ delegation: “We support the large majority of Libyans who want to take part in peaceful elections on Dec. 24, and have a say in the future of a united, stable Libya without foreign interference,” U.S. Embassy in Libya tweeted on Tuesday.