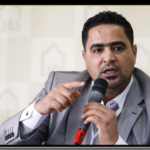 Libyan Presidential Candidate, Suleiman al-Bayoudi, said UN Special Advisor on Libya, Stephanie Williams, was capable of successfully setting and facilitating a meeting between representatives of the parliament and High Council of State (HCS) in Cairo based on paragraph 5 of the Twelfth Amendment, but reaching an agreement on the proposed Constitution controversial issues within 60 days’ notice failed.

The two chambers are therefore required to set up new committees to prepare and adopt a constitutional path within 30 days, Al-Bayoudi said in press statements.

The announcement by Williams of a new round in June is proof that she is “following a mirage and will eventually drown into the desert although the fact she owns a strong document that allows her to move towards the completion of the electoral process which is a great step that will be supported by the population and its elites and will impose the reconvening of the electoral path.”

“From this point, I am afraid that Stephanie Williams will be pushed “to put the cart before the horse” when she is forced to discuss the executive power crisis before the constitutional rule is passed, which is basically what we try to warn about in the petition,” the Presidential Candidate pointed out.

Accordingly, the constitutional rule for elections must be established either through the two chambers or a committee of experts and we must set a deadline for presidential and parliamentary elections. Then, a discussion of the executive branch’s election crisis must occur, according to Al-Bayoudi.

“So there are only two ways for that, either to exclude the two Governments and form a State administration with specific functions or to continue with the two Governments and carry out the elections under the supervision of the District Security Directorates and in both cases, it is a must to reduce expenditures to the minimum,” he explained.