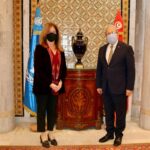 The resumption of the political process in Libya was the focus of a meeting today in Tunis between the Tunisian Foreign Minister, Othman Jerandi, and the U.N. Secretary General’s Special Advisor for Libya, Stephanie Williams.

During this meeting, the two diplomats discussed “efforts made by the U.N. Mission in Libya after the postponement of the elections, in coordination with the various Libyan parties,” according to a statement by the Tunisian foreign ministry.

Jerandi reiterate his country’s “firm support for the choices of Libyan friends to preserve the supreme interest of their country”.

The Tunisian minister also reiterated “support for the UN Mission in Libya and for the efforts undertaken by the advisor to the UN Secretary General to bring together the perspectives of the various Libyan parties.”

For her part, Stephanie Williams praised “the important role played by Tunisia in promoting dialogue between Libyans”.