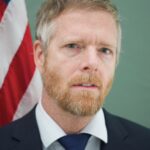 TRIPOLI – Chargé d’affaires of the U.S. Embassy in Libya, Leslie Ordeman, had a discussion on Friday with Libyan members of parliament representing the country’s southern region of Fezzan, according to a statement released by the embassy on Sunday.

Mehdi Al-Awar, Musbah Awhida, and Mohamed Gdiad discussed a wide range of topics with Ordeman, including “counterterrorism efforts in the south, the removal of foreign fighters, the unification of Libya’s political, security, and military institutions, and the necessity of elections in December. ”

“They also discussed the need for increased development in the south to provide the stability required for the success of the country’s ongoing political process,” the American embassy stated.