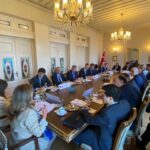 U.N. Advisor on Libya, Stephanie Williams, revealed she was in Istanbul on Thursday for talks about Libya with “senior representatives” from Egypt, France, Germany, Italy, the United Kingdom and the United States, the U.N. diplomat said via Twitter on Saturday.

During the meeting, which was hosted by the Turkish government, Williams briefed the diplomats about developments in Libya since June when she mediated elections negotiations between Speaker of the House of Representatives Aguila Saleh and Chairman of the High Council of State Khaled Al-Mishri.

Touching upon the recent wave of violence in the Libyan capital, Williams said that she and her fellow foreign diplomats “called for calm especially in western Libya where armed groups are jockeying for power and pressuring political actors”.

“We also underline the need to protect the independence and neutrality of key sovereign institutions, including the National Oil Corporation, and to shield them from political maneuvers,” Williams concluded.

On Thursday in Istanbul, I was invited to join a meeting hosted by the Government of Türkiye and attended by senior representatives from Egypt, France, Germany, Italy, the United Kingdom and the United States. Here are some key points from our discussion: pic.twitter.com/PfIMpcBraf