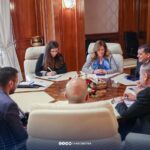 Stephanie Williams, the U.N. Advisor on Libya, urged the country’s outgoing premier Abdul Hamid Dbeibeh to guarantee the payment of salaries to “all Libyan counterparts, regardless of political or organizational affiliation”.

This was stated by Williams herself via Twitter following her Wednesday meeting with Dbeibeh, during which she briefed him on the outcomes of the consultations on elections’ constitutional framework, that were held in Cairo a week ago with the Joint Committee consisting of members from the House of Representatives and High Council of State.

Dbeibeh’s government withheld paychecks for soldiers of the eastern-based Libyan National Army (LNA), which has been a point of contention between the government and the parliament.

5/5 Lastly, I highlighted the importance of maintaining calm on the ground, and of guaranteeing the payment of salaries to all Libyan counterparts, regardless of political or organizational affiliation.

0 0
Previous : Militia leader hosts Dbeibeh during Iftar
Next : Bashagha: New national era has begun, in which Libyans are united