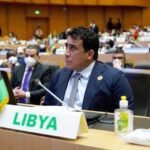 Twenty-one Libyan candidates for the presidential elections called on the Presidential Council (PC) to declare a state of emergency and intervene to address the current political impasse.

The candidates demanded in a statement to give each of the House of Representatives (HoR) and the High Council of State (HCS) 30 days, in order to agree on choosing a mini-election government to run the country within six months.

They declared their support for the efforts of the Adviser to the Secretary-General of the United Nations, Stephanie Williams, to coordinate with the Presidential Council to prepare a constitutional basis on which to hold simultaneous parliamentary and presidential elections.

The candidates stressed on the Presidential Council to deal with the political impasse by resorting to the requirements of the state of necessity to address the situation that threatens national security and the country’s unity and stability.

They also called on the Presidential Council to consider HoR and HCS on a legislative leave that extends until the election of the new House of Representatives, with the selection of a mini-election government until the completion of the parliamentary and presidential elections.

The candidates added that the Presidential Council would assume all powers during the state of emergency, without prejudice to the independence of the judiciary.

0 0
Previous : NOC Chair: Libya can increase its oil production to 3 million barrels per day
Next : 497 migrants were intercepted at sea and returned to Libya in April, says IOM