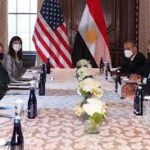 U.S. Secretary of State Antony Blinken met on Wednesday with Egyptian Foreign Minister Sameh Shoukry in Washington, D.C., where they noted support for Libya’s UN-facilitated political process leading to elections, according to US State Department.

Secretary Blinken and Foreign Minister Shoukry discussed the strategic partnership between the United States and Egypt, noting that 2022 marks 100 years of bilateral diplomatic relations, the State Department said in a statement.

They discussed efforts in key areas such as regional stability and security cooperation, as well as the next steps to build off the successful Negev Ministerial.

The Secretary and Foreign Minister also discussed global developments, including Russia’s attack on Ukraine and its mounting global consequences, including rising food insecurity.

The Secretary reaffirmed the importance of human rights in their bilateral relationships with all partners, including Egypt, and encouraged progress on protecting human rights and fundamental freedoms.