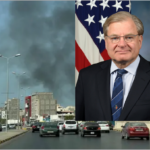 Date: Saturday, September 4, 2021
39 Views
U.S. Ambassador and Special Envoy to Libya, Richard Norland, said Libyans do not wish to see a repeat of the civil conflict of the past, and the best hope for stability lies in the elections scheduled for December.
“Political leaders on all sides bear a responsibility for agreeing immediately on a compromise solution that will enable those elections to take place as scheduled. The United States will support them in this process,” U.S. Embassy in Libya quoted Norland in a tweet.
It is noteworthy that violent clashes took place at dawn on Friday in Tripoli between the “Stability Support Force” militia and Brigade 444 militia, which were both formed by Fayez al-Sarraj, Head of the former Tripoli-based Government of National Accord (GNA).
In this regard, also UN Support Mission in Libya (UNSMIL) called on all relevant authorities to assume their responsibilities in ensuring the protection of civilians and in exercising control over their respective units in accordance with relevant Security Council resolutions and in particular UN Security Council Resolution 2570, including through the initiation of an elaborated comprehensive Disarmament, Demobilization, and Reintegration (DDR) and Security Sector Reform (SSR) process to bring all the arms under the control of the State.
Tags:Richard NorlandTripoli ClashesU.S.UNSMIL