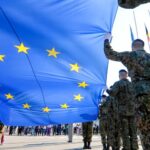 The European Union is planning for a military mission in Libya in order to “compete for influence with foreign powers there”, reported the European online newspaper EU Observer on Monday, citing a leaked paper.

EU Observer said it has seen internal paper from the EU foreign service, dated 1 July, which outlines the objectives of the military mission that the EU allegedly plans to launch in Libya.

“In this context, an EU military CSDP [Common Security and Defence Policy] engagement should … be considered in order not to leave the entire field of activity in the military domain to third states,” it added.

The alleged document reportedly did not name the third states that are involved in what it called the “competitive situation” in Libya.

However, the alleged EU paper did allude to Turkey by saying that one “third country” had “continued denial of inspections” of suspected arms shipments to Libya in violation of a U.N. embargo.

This country “maintains a strong military presence in Libya and provides training to selected armed forces in western Libya”, the alleged document said, in a clear reference to Turkey, which sent its troops to Libya and provided military assistance to armed groups in Tripoli since late 2019.

The EU Observer report indicates that European leaders particularly seek to curb the Turkish influence in Libya with regard to the migration crisis.

“Libyan authorities have expressed a need for EU support on Libya’s borders, including in the south,” the EU paper allegedly said.

“Should the Libyan authorities agree, this may open the possibility of obtaining overflight rights for EU aerial surveillance assets over Libyan territory,” it added.

Nabila Massrali, the spokeswoman for the EU Foreign Affairs Representative Josep Borrell, denied on Monday any discussion within the EU about sending troops to Libya at the present time.

According to Italian news agency Aki, Massrali told reporters that the EU support for Libya is in place through its diplomatic mission and Operation IRINI.