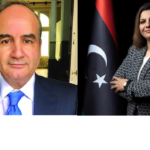 Libyan FM clarifies details on resignation of its ambassador to EU

The Libyan Foreign Minister, Najla Al-Mangoush, said that the Libyan Ambassador to the European Union, Hafith Qudor, resigned because he was embarrassed by dismissal, not because of his keenness on holding elections on December 24 in Libya.

In response to Qudor, Mangoush said in a letter addressed to him, that his arguments in his resignation from his position as ambassador to EU that the government does not want to hold elections is “a flimsy claim, and that he submitted his resignation embarrassed by the dismissal, claiming that he is keen on holding the elections that he basically doesn’t believe in.”

It is noteworthy that the Libyan ambassador to the European Union announced his resignation on Sunday after two years in office, citing the Libyan government’s policies as the reason behind his decision.

Hafith Qudor accused the Government of National Unity (GNU) of attempting to “prevent” and “thwart” the general elections in December 24. He also criticized the government’s “apparent confusion in the management of public affairs” and “its failure, that all Libyans know and suffer from, in achieving the minimum level of national stability and livelihood”.

Qudor was appointed as the country’s ambassador to the E.U. in 2019 by the former Government of National Accord (GNA).