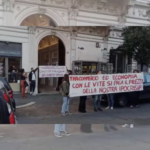 Italian activists gathered on Saturday in front of the headquarters of the Italy-Libya Chamber of Commerce to demand revocation of their country’s 2017 memorandum with Libya.

The activists held a slogan that reads “closed for violation of human rights” at the entrance gate of  the Italy-Libya Chamber of Commerce.

In 2017, Italy signed the memorandum with Libya for cooperation with the Libyan coastguard, which included the provision of four patrol vessels. The deal empowered the Libyan coastguard to intercept migrant boats at sea and redirect them to Libya, where aid agencies say refugees are abused and tortured. In February 2020, this agreement was renewed for another 3 years.

After the protest on Saturday morning, activists announced more actions in many other Italian cities.

“We will be in the streets with refugees in Libya to ask the Italian Parliament to revoke the Memorandum of Understanding with Libya; immediately stop all financing and collaboration with the militias that animate the so-called Libyan coast guard,” said the activists according to Italian newspaper La Repubblica.

“We ask to restore an Italian mission and European search and rescue in the central Mediterranean; to block trade agreements with Libya in conditions of violation of human rights,” they said before adding, “And to facilitate in every way the evacuation of refugees from Libya through legal and safe channels of entry into Europe”.

0 0
Previous : Haftar: Whoever defeats terrorism must defeat corruption and build secure, stable state
Next : Libya offers condolences to Turkey over coal mine explosion