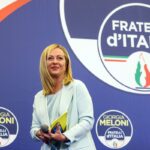 Far-right leader Giorgia Meloni has claimed victory in Italy’s election, and is on course to become the country’s first female prime minister.

In a historic win, Meloni’s Brothers of Italy took 26% of the national vote in Italy’s latest election. She is widely expected to form Italy’s most right-wing government since the Second World War.

Meloni’s right-wing alliance – which also includes Matteo Salvini’s far-right League and former PM Silvio Berlusconi’s centre-right Forza Italia – will take control of both the Senate and the Chamber of Deputies.

Her party – Brothers of Italy – is seen as the successor to Italy’s old fascist movement, and she began her career in politics in the Italian Social Movement which was founded by ex-fascists after the Second World War.

Although she has worked hard to soften her image, emphasizing her support for Ukraine and diluting anti-EU rhetoric, she leads a party rooted in a post-war movement that rose out of dictator Benito Mussolini’s fascists.

In August, she sparked criticism from several Italian policymakers after she called for a “naval blockade” on Libya to stop migrants leaving the North African country for Europe through the Mediterranean Sea.

She claimed at that time that the purpose of the blockade is to screen all the migrants before leaving to ascertain whether they are genuine refugees. Those who can prove their refugee status should be allowed through, Meloni said, while those who cannot should be sent home.

Several Italian policymakers have pointed out that such proposal would constitute a “declaration of war”. But Meloni remained undeterred, writing on Facebook at that time: “Those who blabber on today that the naval blockade cannot be done because it is “an act of war” demonstrate their total ignorance on the issue of immigration.”

Meloni is now deciding who will get top jobs in the right-wing government she is expected to lead. The question is who will fill the key jobs and whether they will go to other parties in her right-wing alliance.

Matteo Salvini, for example, was known to covet the interior ministry, which he previously led from June 2018 until September 2019 in the cabinet of former prime minister Giuseppe Conte. However, Salvini is currently on trial for barring a boat from docking as part of his policy to close ports to rescue boats.