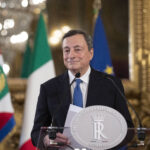 Italy is working behind the scenes on an international agreement to find a solution to the crisis in Libya, Italian news agency Nova reported on Wednesday.

Citing “diplomatic” sources, Nova said that Italy plans to convene a technical table with the three Western members of the U.N. Security Council with the right of veto, namely France, the U.K. and the U.S., plus Germany, Turkey and Egypt.

The meeting will reportedly be held before June 22, a date marks the end of the road map of the Libyan Political Dialogue Forum (LPDF), which gave authorized mandate to the government of Abdul Hamid Dbeibeh.

The technical meeting on Libya is expected to take place in a “neutral” Arab city within the next three weeks.

“The stabilization of Libya is a matter of national interest for Italy,” Nova quoted a source as saying. “We are trying to organize a meeting to bring Egypt and Turkey to an agreement.”

“Italy’s relations with Turkey are better now than they were two months ago. The real challenge now is the relationship between Ankara and Cairo,” added the diplomat added.

“It is not just an Italian effort. The P3 + 2 (France, United Kingdom, United States plus Italy and Germany) is a consolidated structure that must open up more and more to Turkey and Egypt, the two countries that today have a priority position in the West and in the East [of Libya],” another diplomatic source told Nova.

“The minimum objective is to help lower the tension through the involvement of Egypt and Turkey before the deadline of June 22,” explained the second source.

0 0
Previous : Over 18,000 migrants arrived in Italy since beginning of 2022, says government
Next : Pro-Dbeibeh force imposes 30-day ban on demonstration in Tripoli