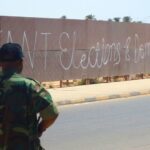 49 presidential candidates for the Libyan elections, postponed since December 2021, threw a stone into the still waters of Libyan politics. They presented a new initiative to end the deadlock due to the disagreements of the House of Representatives (HoR) and the High Council of State (HCS) regarding the final pending details of achieving the constitutional rule organizing the general elections.

The initiative proposes freezing all political institutions that live in permanent disputes and complete divide, whose presence in the situation has become a reason for obstructing the political transition process, electing institutions that derive their legitimacy from the votes of the people, and handing over power to the Supreme Judicial Council to arrange for a comprehensive electoral process before the end of this year.

Handing over power to the judiciary

The 49 candidates, who included prominent candidates such as the former Libyan delegate to the United Nations, Ibrahim al-Dabbashi, former members of the House of Representatives, Sharif al-Wafi and Khalifa al-Daghari, and the prominent politician Aref al-Nayed, called for the Supreme Judicial Council to take over the reins of the country, and to suspend the work of the HoR, HCS, and the two governments of Abdul Hamid Dbeibeh and Fathi Bashagha, and holding elections within a period not exceeding nine months.

The candidates said, “The people have lost confidence in the existing legislative and executive bodies, due to their failure to achieve their legitimate aspirations, so we proposed handing over power to the Supreme Judicial Council as the only institution empowered to maintain its independence and unity and includes legal competencies from all over Libya.”

They believe that “the Judicial Council is able to find a way out of the legislative bottlenecks, especially the constitutional rule, that impede going to the elections, and it can assume the executive power temporarily until the elections are held within a period not exceeding nine months.”

Their initiative, a copy of which was delivered to the UN Support Mission in Libya (UNSMIL), suggested that “the Supreme Judicial Council grant the HoR and HCS an open legislative leave and issue a decree dissolving the Presidential Council to carry out its tasks, dissolving the governments of Dbeibeh and Bashagha, and assigning deputy ministers to carry out their duties until a new government is formed.”

Participants in preparing the initiative indicated that its aim is to form a mini-government of technocrats to take the necessary measures according to a specific timetable for the resumption of the presidential and legislative elections.

They added, “We suggest that the HoR choose a prime minister for a mini-government, provided that the premier is not a member of the House, the State Council, or the previous General National Congress, or those who hold or had held sovereign or ministerial positions, and that the new prime minister presents his cabinet to the council within 10 days for approval.”

The role of the High National Elections Commission

The initiative of the presidential candidates called for the Judicial Council to address the High National Elections Commission (HNEC) and present the constitutional basis and laws necessary to resume the presidential and parliamentary electoral process within a period not exceeding 100 days of assuming its duties, within 60 days of receiving the constitutional rule and electoral laws.

The initiative concluded by proposing that “the presidential and parliamentary elections be held within 45 days of the issuance of the final lists of candidates.”

None of the Libyan parties concerned with the initiative, not even those meant by freezing, have issued any comment on the initiative of the 49 presidential candidates so far. The same applies to the UNSMIL, whose Head, Abdoulaye Bathily, received a copy of the initiative, according to the candidates.

This initiative came after the constitutional negotiations between the HoR and HCS to approve the constitutional rule organizing the elections, due to disagreements over some conditions related to the presidential candidates in particular.

Reluctance of the parties concerned

The Libyan journalist, Siddiq al-Werfalli, commented on the presidential candidates’ initiative, describing it as “good and comprehensive.” However, he believes that “it is difficult that the initiative sees the light of day due to the expected reluctance of the political parties that currently control the political process, such as the House of Representatives, the High Council of State, and even the two competing governments in Benghazi and Tripoli, because the desire of these parties to continue in power has become clear.”

Al-Werfalli called on the UNSMIL to seriously consider this initiative, considering it “one of the best initiatives that have been presented recently, because it accurately defines the tasks assigned to each party that it proposed to participate in its implementation, and sets an accurate timetable for each part of it, leading to the expected elections.”

The dilemma of politicizing the judiciary

Parliamentary candidate Jamal al-Fallah considered, in an interview with “Independent Arabia”, that “the initiative in principle is excellent, and it came at a time when everyone was convinced that the HoR and HCS could not reach a solution that ends the issue of the power struggle, and the personalities that drafted the initiative have political balance, great political vision, and a well-known political history.”

Despite his praise for the initiative, al-Fallah has reservations about “the issue of forming the Supreme Judicial Council for the executive authority so as not to get involved in the controversy of the politicization of the judiciary, which happened when the Speaker of HoR tried to establish a constitutional court in Benghazi, and his interference in the appointment of advisors to the Supreme Court was considered tampering with the judicial authority.”

He added, “The point of dissolving the House of Representatives and the High State of State, which was included in the initiative, is indeed an urgent demand, and the handover of their legislative duties to the Supreme Judicial Council is also required, but I stress once again that the problem in the initiative is in the formation of the executive authority by the Council, because it will involve us in another political conflict.”

He said, “A way out of this problem is possible by adopting the proposal put forward a while ago, which calls for activating the Political Dialogue Committee again and increasing the number of its members to 200 members so that it becomes similar to the legislative authority and performs its duties, and it is the one that produces a new, very small executive authority, whose main task is to organize elections, so we get out of the dilemma of politicizing the judiciary.

He stressed, “It is very important, in my opinion, for the Supreme Judicial Council to work to revise and prepare the constitutional draft and submit the constitution to a referendum, because the existence of a constitution guarantees that the armed parties that impose themselves on the Libyan people will not overturn the election results if they do not come in their interest.”

0 0
Previous : US State Department: We communicate regularly with Libyan leaders to agree on path to holding elections without delay
Next : Meeting Dbeibeh, Jerandi stress Tunisia support for Libya to assume its regional, Arab position