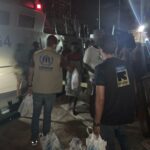 279 migrants were intercepted off Libya’s coast on Monday night by the Tripoli-based Coast Guard before they were brought back to the country, the U.N. Refugee agency (UNHCR) said.

According to UNHCR, one body was recovered and 14 were reported missing during the operation which took place near the western city of Zawiya.

🚨Between last night and today, 279 individuals were returned to the Tripoli Naval Base (95) and Azzawiya Oil Refinery Port (184) following three disembarkations. One body was recovered and 14 were reported missing during the operation in Azzawiya (45 km east of Tripoli). pic.twitter.com/gnUrazboMs