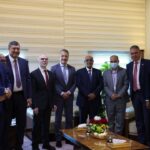 According to the NOC statement, Sanalla revealed that “next year will witness ambitious action plans that will contribute to achieving a package of the Corporation’s goals, the most important of which is the drilling of dozens of wells on land and sea and many oil operations, pointing to the role of NESR in achieving these goals.”