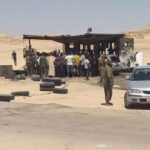 One person was reportedly killed during exchange of fire with the LNA units following the attack. There were no human casualties among the LNA units.

The LNA is yet to address the incident publicly. No armed group has claimed responsibility for the attack so far.