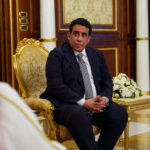 President of the Libyan Presidential Council, Mohamed al-Menfi, and the Vise-President, Abdulla al-Lafi, are preparing to announce an initiative to postpone the elections scheduled for Dec 24 to March 2022, according to al-Marsad newspaer.

The initiative is based on a claim that a constitutional rule has not been completed and Head of the State Council, Khaled al-Mashri, rejected the electoral laws issued by the Parliament, al-Marsad sources said.

It was to be presented at the Libya Stability Conference, which was held in Tripoli, but it was postponed to the coming days, the Libyan newspaper added.

Al-Menfi and al-Lafi presented the initiative to a number of countries and bodies, and it has so far enjoyed the support of Turkey only, it pointed out.