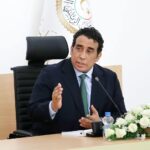 Libya’s Presidential Council will intervene to determine the legal framework for the country’s electoral process if the leaders of the House of Representatives and High Council of State fail to do so during their upcoming negotiations this week.

This was announced by Mohamed al-Menfi, chairman of the Presidential Council, during his yesterday’s meeting with a group of tribal representatives.

“If this meeting fails, we, as the Presidential Council, will play a role by using our sovereign power so that this matter is not left to stretch and delay,” Al-Menfi said.

For their part, the tribal representatives called for organizing presidential and parliamentary elections in the country “as soon as possible” to end the decade-long transitional period.