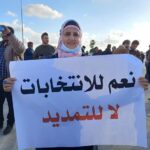 Dozens of demonstrators took to the streets in Benghazi on Friday to protest against the postponement of the elections, which were originally scheduled for December 24.

The demonstrators also voiced their opposition for extending the mandate for the Government of National Unity beyond the elections date.

Libya’s House of Representatives and the High National Election Commission (HNEC) abruptly called off the presidential elections two days before it took place.

The parliament cited “technical, judicial and security” obstacles which it claimed would make it “impossible” to hold the first round of presidential polls on December 24.

The electoral commission proposed pushing back the voting date by a month, confirming a delay that had been widely expected amid disputes over the rules, including the eligibility of several divisive candidates.

Over two million Libyans had already registered for voting cards for the election in what politicians on all sides in Libya have said is a sign of strong popular desire for a vote.

Demonstrators in Benghazi protest against postponement of the elections on Friday