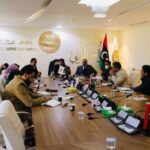 The Chairman and members of the Roadmap Committee formed by the Libyan House of Representatives (HoR) met Monday with the Chairman of the High National Elections Commission (HNEC), Imad Al-Sayeh.

The meeting, held at HoR headquarters in Tripoli, discussed a number of technical issues related to the work of HNEC in any electoral process.

It is noteworthy that the Roadmap Committee had announced at the end of last December its intention to communicate with all Libyan parties to expand the base of participation and restore the Libyan cause to the Libyans.

The committee clarified in a press briefing that restoring the Libyan issue would be through finding Libyan solutions to reach the presidential and parliamentary elections and to exit the successive transitional stages.

The Roadmap Committee indicated that it discussed, in its first meeting at the Parliament headquarters in Tobruk, its mechanism of action to accomplish its tasks on time.

0 0
Previous : Libyan oilfields to reopen after deal between Dbeibeh and PFG, Italian press reports
Next : Over 600 migrants detained in Tripoli today