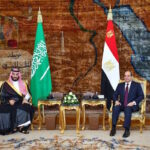 A joint statement by Saudi Arabia and Egypt stressed Tuesday the importance of immediately starting to implement the exit of all foreign forces and mercenaries from Libya without exception or procrastination, within a specific timeframe, in implementation of Security Council Resolutions 2570 and 2571, the outcomes of the Paris Summit, the Berlin Process, the League of Arab States, the African Union, and the Mechanism of Libya’s Neighboring Countries.

They also stressed the need to preserve the unity and integrity of the Libyan territories, and the importance of the Libyans reaching a Libyan-Libyan solution without any dictates or foreign interference, leading to holding presidential and parliamentary elections simultaneously.

Saudi Arabia valued Egypt’s efforts to restore Libya’s security, unity and sovereignty, and generously hosting the work of the Libyan constitutional track meetings in coordination with the United Nations.

The two sides stressed the importance of supporting the role of Libyan institutions and assuming their responsibilities.

They also praised, in this context, the sincere national efforts and the legitimate procedures and decisions issued by the Libyan House of Representatives (HoR), as it is the elected legislative body that expresses the aspirations of the Libyan people.

They expressed their support for the relevant efforts of the Libyan 5+5 Joint Military Committee, as well as the preservation of the ceasefire agreement in order to preserve the security, stability and capabilities of Libya.