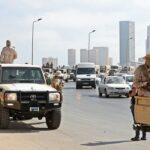 Tripoli Security Directorate called on people affected by Friday clashes to go to the nearest police station or criminal investigation office, in order to prove the incident and take legal action regarding it.

It is noteworthy that armed clashes erupted on Friday evening in Tripoli, causing a state of panic among the people.

Identical press sources said the armed clashes stopped after the 444th Brigade intervention and deployment in the clashes area, amid great caution after a clashes night that terrified the residents of the capital.

The 444th Combat Brigade secured and removed the stranded families, some of whom took refuge in the nearby Bab al-Bahr Hotel and in cafes and buildings near the area of ​​the clashes, which according to the information did not result in any civilian deaths.

Activists on social media circulated video clips showing some of the clashes and what was accompanied by great panic and terror for citizens, especially on the Shatt Road, which witnesses picnics on weekends for people seeking recreation and escaping high temperatures and power outages.

The video clips showed families and children fleeing violent clashes with machine guns, amidst a state of chaos

0 0
Previous : In the wake of Tripoli clashes, UN calls for “doing everything possible to preserve Libya’s fragile stability”
Next : Oil prices drop to $120 a barrel