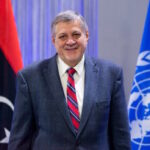 The Special Envoy of the UN Secretary-General and Head of the United Nations Support Mission in Libya (UNSMIL), Ján Kubiš, hailed on Sunday the achievements secured by the (5+5) Joint Military Commission (JMC) since the signing of the comprehensive ceasefire agreement in Geneva a year ago.

“The ceasefire agreement has paved the road for the Libyan-led and -owned comprehensive political process towards sustainable stability, unity, prosperity, and full sovereignty of Libya,” UNSMIL quoted Kubis.

The critical importance of the ceasefire agreement and its implementation was confirmed by the participants of the Libya Stabilization ministerial conference held on 21 October, in Tripoli.

“In the beginning of this month, the JMC has also reached another important milestone by signing a comprehensive Action Plan for the gradual, balanced, and sequenced withdrawal of mercenaries, foreign fighters, and foreign forces from Libya,” Kubiš added.

The Special Envoy reiterated that the UN and its international partners stand ready to support the JMC in the implementation of the ceasefire agreement as well as the action plan through consultations with internal and external stakeholders.

He commended the supportive efforts of the Security Working Group of the International Follow-Up Committee for Libya, that emanated from the Berlin Conference.

Last week, the first group of UN monitors to support the Libyan ceasefire monitoring mechanism arrived in Libya. The UN monitors will be working under the guidance of the JMC to monitor the ceasefire and verify the withdrawal of mercenaries, foreign fighters, and foreign forces.

The Special Envoy stressed the significant role of the JMC in the confidence-building measures embodied in the resumption of oil exports, exchange of detainees, and the reopening of airspace as well as the reopening of the coastal road.

0 0
Previous : Cyrenaica demands fair distribution of wealth among Libya’s regions
Next : UNHCR: 370 migrants intercepted in the sea and returned to Libya